American B-52 bombers returning from, and arming for sorties into Afghanistan, Diego Garcia 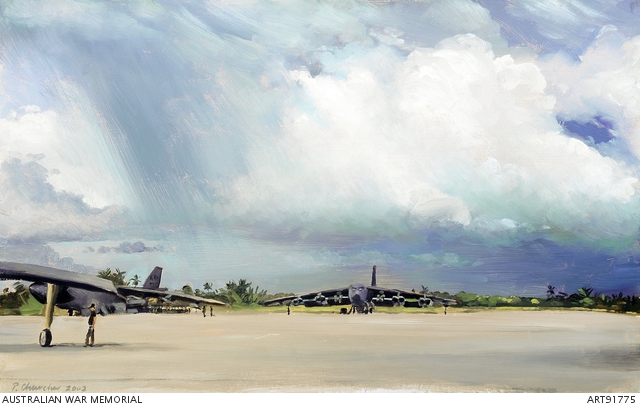 American B-52 bombers parked on the runway. Peter Churcher recalled, "Whenever I caught the bus to Tent City I would pass the main American flight line where all the B-52 bombers were making sorties into Afghanistan were parked. These large aircraft looked deadly and menacing to me particularly when one knew the devastation they were capable of delivering. Again I asked my Commanding Officer whether it would be possible to do a painting on the American Flight Line. Many phone calls had to be made and American brass consulted to gain permission to enter this highly secured area. As always being the war artist I seemed to be able to manage to get such permission. They said initially forget about that one there's no way you'll get down there. I ended up talking to one of the top brass who said 'I can't see why not'. People don't realize how classified that painting is. A view not normally seen by people. I was escorted down there, an afternoon on the flight line painting the bombers. Some had just returned from Afghanistan, there wings emptied of their bombs, others were being re-loaded for the next sortie which would have been taking off later that evening. As luck had it the tropical skies of Diego Garcia were bringing huge storm clouds over the scene constantly. At any point during the painting I was expecting to be drenched in a tropical down pour. I did not let this deter me because the drama of the sky was perfect and fitting backdrop to the menacing aircraft that I was trying to paint".