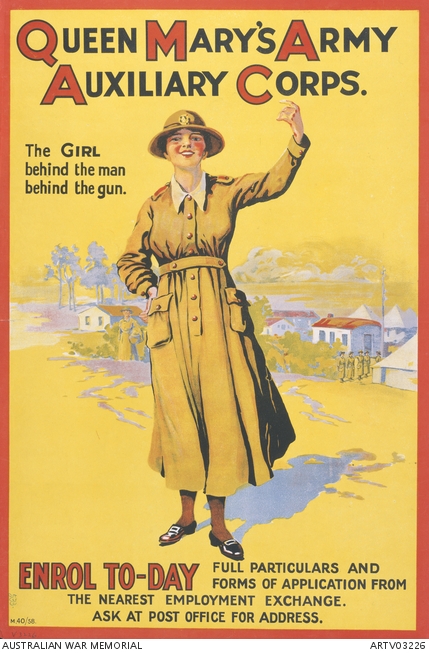 This First World War British poster was designed to encourage women to enlist in Queen Mary's Army Auxiliary Corps (QMAAC). The poster depicts a woman wearing the uniform of the QMAAC, with a small camp of several women training in the background.

Initially called the Women's Army Auxiliary Corps (WAAC), the QMAAC was formed in Great Britain in 1918 from the earlier Women's Legion, allowing women who were not qualified for the nursing services to play a service role in the war. Its members were primarily employed as clerks, telephonists, waitresses, cooks, and instructors, many of them seeing service in France. A statement released by Buckingham Palace later in 1918 read 'As a mark of Her Majesty's appreciation of the good services rendered by the WAAC both at home and abroad since its inauguration, and especially of the distinction which it earned in France during the recent fighting on the Western Front, Her Majesty has been graciously pleased to assume the position and title of Commandant-in-Chief of the Corps, which in future will bear the name of Queen Mary's Army Auxiliary Corps.' QMAAC was disbanded in 1921.