From 1864, until their disbandment in 1883, Victorian volunteer military units would gather at ... 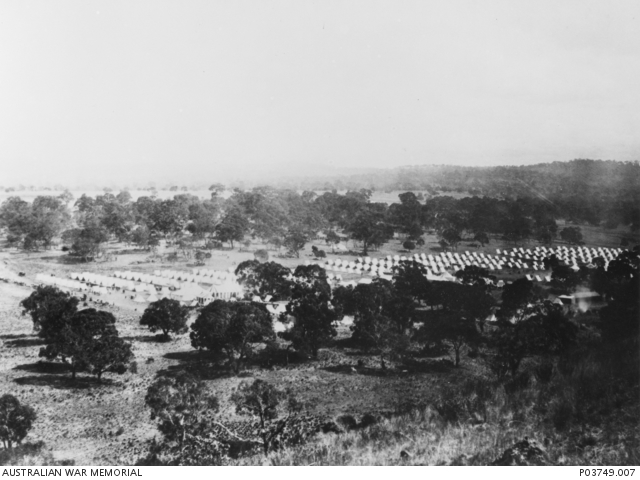 From 1864, until their disbandment in 1883, Victorian volunteer military units would gather at Sunbury and at other Victorian venues (including the You Yangs and Hobsons Bay at Cheltenham) to conduct their annual Easter encampment. In 1864 a wealthy Victorian land owner know as 'Big' Clarke offered the Victorian Volunteer Forces a large section of his land as a venue for the next Easter encampment. Here, in the valley of Jacksons Creek near Sunbury, (in an area now known as Rupertswood), nearly two and a half thousand volunteer military personnel and up to fifteen thousand civilian spectators would gather for the six day event. The volunteers erected up to 400 tents in neat military rows in the valley, which surrounded by hills, formed a natural amphitheatre from which the civilian spectators could look down onto. The volunteers conducted drill exercises, exhibitions of horsemanship and displays and demonstrations in the use of small arms and the larger horse drawn guns of the day, all to the enjoyment of the thousands of civilian spectators. Military bands performed concerts during the evenings and on one of the nights, the crowds were treated to a four hour fireworks display. As the popularity of this event grew, crowd control became a problem, with the onlookers often mingling too freely with the military demonstrations. To remedy this, the visiting public were requested to restrict themselves onto a plateau on the eastern side of the valley, (providing space for 20,000 spectators) which provided a grand vista of the valley below. To assist the visitors, railway workers built a timber bridge over Jacksons Creek and cut a zig zag pathway along the ascent to the viewing area above. The zig zag path at Cannon Gully is still visible today.