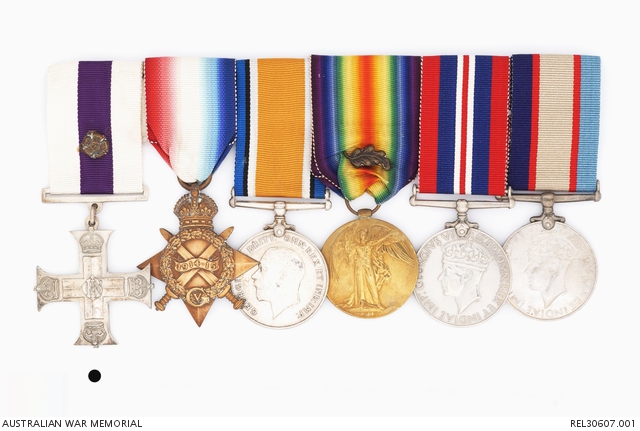 Military Cross with bronze rosette on ribbon in place of the missing bar. Unnamed as issued.

Born in Victoria in 1891, Edward Vivian Smythe served in both World Wars. During the First World War he served as an officer with 24 Battalion, AIF, reaching the rank of major. He was awarded a Military Cross (MC) at Warlencourt, France, in 1917, and a bar to his MC at Broodseinde, Belgium, in 1918. He was also mentioned in despatches. The recommendation for his MC reads 'For gallant and skilful handling of his Platoon in action at DINKUM SPUR near WARLENCOURT on 26th February 1917. He organised a strong patrol and held GAMP TRENCH under close range Machine Gun enfilade fire until relived in the evening. Accurate and valuable reports were received from this post throughout the day, and the possession of a footing near MALT TRENCH was of great value in the subsequent operations.' The recommendation for the bar to his MC reads 'For conspicuous gallantry near Broodseinde in leading his Coy in the attack on DAISY WOOD on the 9th Oct. Throughout the day, he, at great personal risk supervised the whole Battalion front as all other Company Commanders and many platoon Officers had become casualties. His sound judgement made communication with all Companies possible, and at all times he kept in close touch with Battalion Headquarters. His personal reconnaissance materially aided the clearing of DAISY WOOD. Thoroughness and clear initiative inspired all ranks to offer material resistance to the enemy and eventually permitted the formation of a strong defensive line.' During the Second World War Smythe served with 2 Garrison Battalion at prisoner of war camps at Cowra from 1942-1943, and at Hay from 1943-1945. In 1945 he transferred to the military administration in New Guinea and was involved in the repatriation of Japanese, Korean and Formosan POWs. He also conducted local courts martial and investigated local war crimes. He was discharged in Rabaul in 1947 and remained in New Guinea working for the Post and Telegraph Service until his retirement in 1961.