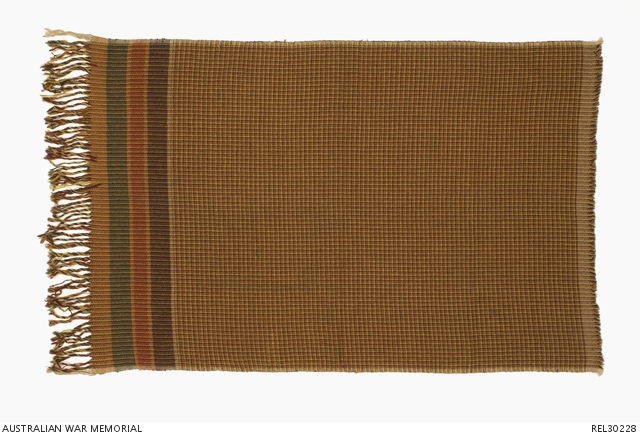 Length of Tweed fabric produced by Miss Hazel Perdriau as an example of the rehabilitation work done by Australian soldiers. The fabric is woven in a pattern of checks from green, brown, yellow, pink, white and red wool, and has tassels at one end. The other end is cut off, leaving a short fringe, while the two sides have selvedge edges.

Length of Tweed fabric produced by Miss Eleanor Hazel Perdriau as an example of the rehabilitation work done by Australian soldiers. During the Second World War, Hazel Perdriau worked as a Red Cross volunteer, before taking up full-time employment as a rehabilitation worker. She served with 104, 113 and 114 Australian General Hospitals. At 113 AGH in Sydney, which later became Concord Repatriation Hospital, she was placed in charge, at various times, of the Pottery, Music and Weaving Rooms. It was in 1946, while in charge of the latter, that Miss Perdriau was asked (apparently by the Australian War Memorial) to provide an example of the rehabilitation work being produced by Australian servicemen in the hospital. She accordingly produced a length of tweed, of the same quality as that being manufactured by the patients she was teaching.