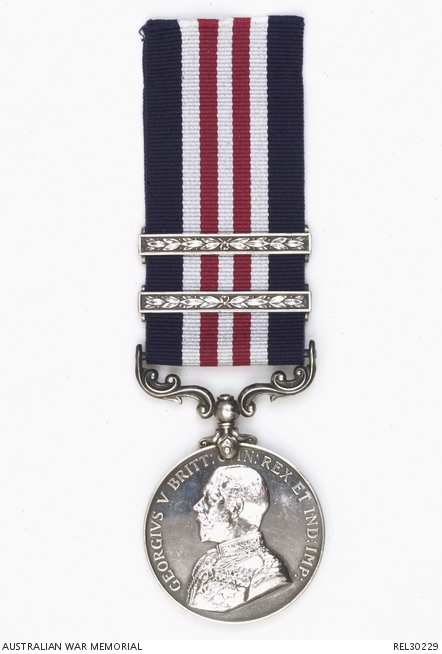 Corporal William Walter Boswell a regimental stretcher bearer of 45 Battalion AIF enlisted 10 June 1915 and returned to Australia 13 April 1919. He was awarded the Military Medal with 2 bars, one of only 15 Australians to receive this combination during the First World War. The recommendation for the award of the Military Medal reads, 'From 5th to 8th August [1916] he worked unceasingly day and night carrying wounded near POZIERES [France]. He particularly distinguished himself on the afternoon of 7th August during the attack on MUNSTER ALLEY and TORR TRENCH when for three hours he bandaged wounded men and carried them as far as the aid post. All this time there was a heavy bombardment and at places the communications trenches were blown in necessitating the stretcher bearers going overland.' [i.e. not protected by the trench walls] The recommendation for the award of the first bar reads, 'For his gallant conduct and untiring energy in collecting and attending the wounded during the enemy attack near DERNANCOURT, SW of Albert [France] on April 5th [1918]. He showed great courage in organising his stretcher bearers, seeking out the wounded, carrying them to safety and tending their wounds. Under very heavy artillery fire he worked for hours without a thought of his own safety and by his gallant conduct undoubtedly saved a number of lives. It was die to his effort that the wounded of his unit were cleared off the battlefield and his determined endurance had a very inspiring effect on all the men in his Battalion'. The recommendation for the award of a second bar reads, 'For conspicuous bravery and devotion to duty. On the morning of 18th September, 1918, his Battalion was attacking West of BELLENGLISE. This N.C.O., who was in charge of Stretcher-bearers, remained in a heavy barrage dressing and assisting wounded. His unfaltering courage, not only prompted the admiration of the wounded, but his care and attention was of inestimable benefit to them.'