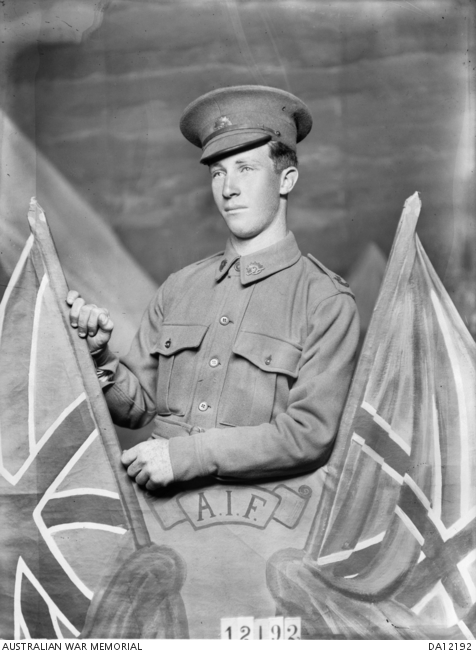 Studio portrait of 3134 Private (Pte) Gilbert Harold Hindle. A carpenter from Caulfield, Victoria prior to enlistment, Pte Hindle embarked with the 7th Reinforcements, 21st Battalion from Melbourne on HMAT Wiltshire on 18 November 1915. He later transferred to the 15th Machine Gun Company and was promoted to Corporal. Subsequently wounded in the right shoulder and left arm he was evacuated to the 20th Casualty Clearing Station where, on 7 April 1918, aged 21, he succumbed to his wounds and was buried in the Vignacourt British Cemetery, France. This is one of a series of photographs taken by the Darge Photographic Company which had a permit to take photographs at the Broadmeadows and Seymour army camps during the First World War. In the 1930s, the Australian War Memorial purchased the original glass negatives from Algernon Darge, along with the photographers' notebooks. The notebooks contain brief details, usually a surname or unit name, for each negative.