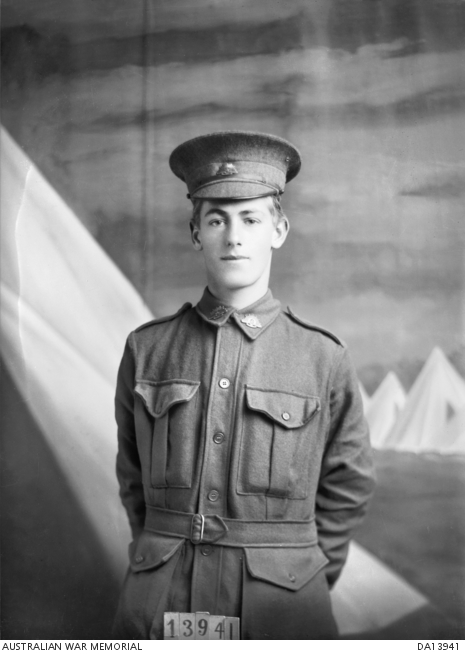 Studio portrait of E S Duncan, believed to be 4096 Private (Pte) Edward Stanley Duncan, 24th Battalion from Caulfield, Victoria. An 18 year old carpenter prior to enlisting on 14 December 1915, he embarked for overseas with the 10th Reinforcements from Melbourne on 7 March 1916 aboard HMAT Wiltshire (A18). Following further training in England, he proceeded to France where he joined the 24th Battalion on 29 August 1916. Pte Duncan was killed in action on 13 November 1916 near Longueval and buried in the vicinity of Flers, France. However, after the war his grave could not be located and he is commemorated on the Australian National Memorial at Villers-Bretonneux, France with others who have no known grave. This is one of a series of photographs taken by the Darge Photographic Company which had the concession to take photographs at the Broadmeadows and Seymour army camps during the First World War. In the 1930s, the Australian War Memorial purchased the original glass negatives from Algernon Darge, along with the photographers' notebooks. The notebooks contain brief details, usually a surname or unit name, for each negative.