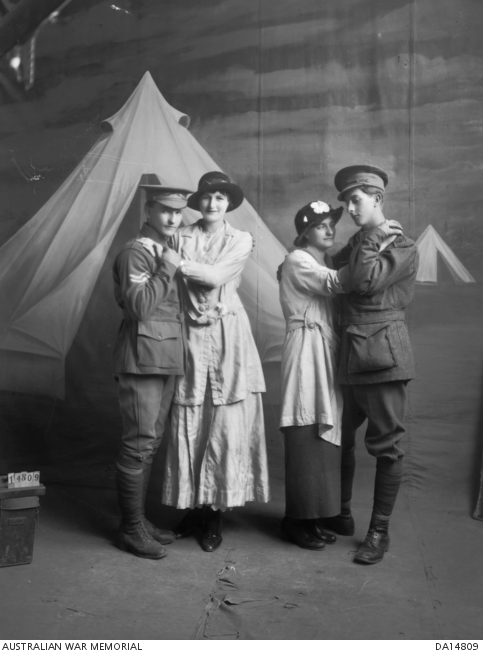 Studio portrait of two corporals and two ladies, embracing. One of the ladies is identified as Miss R Moog [Ruby Florence Moog]. The corporal on the left is 5143 Acting Corporal (A/Cpl) Adolph "Ollie" Moog, 6th Battalion. A bank clerk from Bendigo, Victoria prior to enlistment, A/Cpl Moog embarked with the 16th Reinforcements from Melbourne on HMAT Suffolk on 1 April 1916. Later reverting to the rank of Private, he was wounded in action. On 8 December 1916, aged 21, he succumbed to his wounds and was buried in the Heilly Station Cemetery, Mericourt-L’Abbe, France. Ruby is his sister and the others pictured are unnamed. In the 1930s, the Australian War Memorial purchased the original glass negatives from Algernon Darge, along with the photographers' notebooks. The notebooks contain brief details, usually a surname or unit name, for each negative.