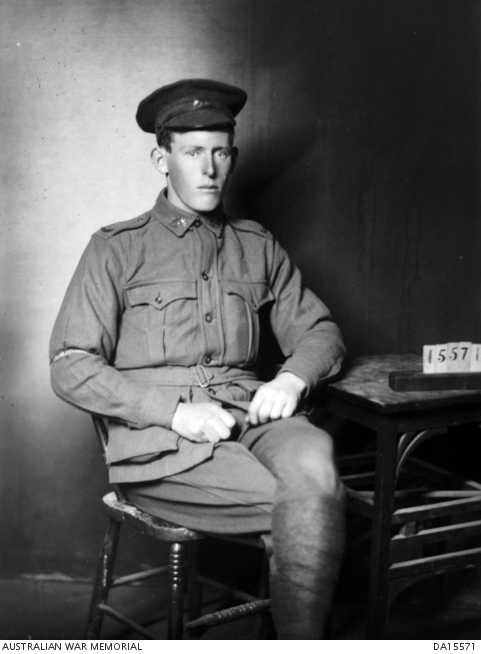 Studio portrait of 5337 Private (Pte) Percy Charles Bird, 14th Battalion. A labourer, of Neerim South, Victoria, he enlisted initially in the 5th Battalion on 24 February 1916 and embarked from Melbourne aboard HMAT Ayrshire on 3 July 1916 for Plymouth, England. Pte Bird embarked for France on 20 October 1916 and was transferred to the 14th Battalion. He completed training on the Lewis Gun in the field for which he was congratulated by Major General W Holmes, 4th Divisional Commander. Pte Bird was reported missing in action near Bullecourt, France, on 11 April 1917. He has no known grave and his death is recorded on the Villers-Bretonneux Memorial, France. He was aged, 23 years. This is one of a series of photographs taken by the Darge Photographic Company which had the concession to take photographs at the Broadmeadows and Seymour army camps during the First World War. In the 1930s, the Australian War Memorial purchased the original glass negatives from Algernon Darge, along with the photographers' notebooks. The notebooks contain brief details, usually a surname or unit name, for each negative.