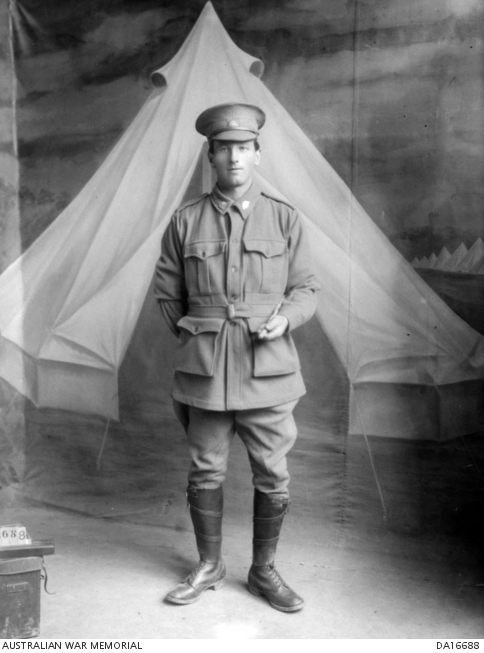 Studio portrait of 6332 Private (Pte) Reginald Hassall Gill, 18th Reinforcements, 23rd Battalion, of Caulfield, Vic. An orchardist prior to enlisting on 15 August 1916, Pte Gill, embarked from Melbourne aboard HMAT Hororata on 23 November 1916. He was wounded in action on the Albert-Amiens Railway Line near Morlancourt, France. On 14 May 1918, aged 23 years, he succumbed to his wounds and was buried in the Mericourt-L’Abbe Communal Cemetery Extension, Picardie, France. This is one of a series of photographs taken by the Darge Photographic Company which had a concession to take photographs at the Broadmeadows and Seymour army camps during the First World War. In the 1930s, the Australian War Memorial purchased the original glass negatives from Algernon Darge, along with the photographers' notebooks. The notebooks contain brief details, usually a surname or unit name, for each negative.