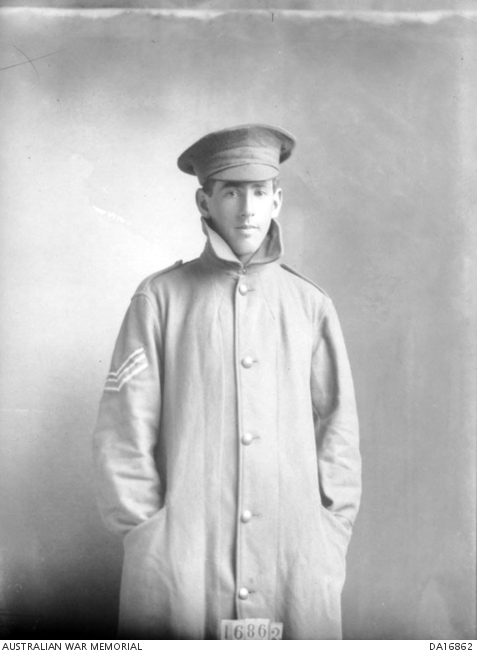 Studio portrait of 1542 Private David Donaldson Ross, 20th Battalion from Sydney, NSW. He is wearing a coat with Sergeant stripes but there is no record of his being promoted to Sergeant. A 38 year old labourer prior to enlisting on 14 April 1915, he embarked for overseas with the 1st Reinforcements from Sydney on 6 June 1915 aboard HMAT Berrima. After serving at Gallipoli, he went on to serve on the Western Front with the 20th, the 61st and the 62nd Battalion He then returned to the 20th Battalion. After being wounded in action on 1 October 1917 near Ypres, Belgium, he was evacuated to England for medical treatment. He died of wounds on 7 January 1918 in the Brook War Hospital, Woolwich and is buried in the Brookwood Military Cemetery, Surrey, England, UK. This is one of a series of photographs taken by the Darge Photographic Company which had the concession to take photographs at the Broadmeadows and Seymour army camps during the First World War. In the 1930s, the Australian War Memorial purchased the original glass negatives from Algernon Darge, along with the photographers' notebooks. The notebooks contain brief details, usually a surname or unit name, for each negative. The names are transcribed as they appear in the notebooks.