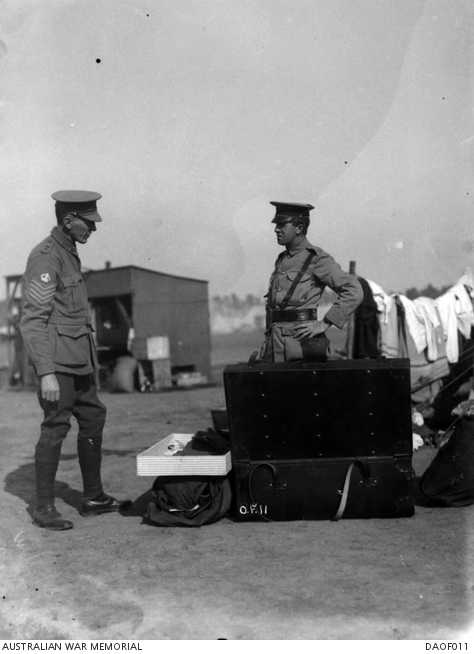 Portrait of Lieutenant (Lt) Parkes and Sergeant Major Miller, probably of the 21st, 22nd or 23rd Battalion. Lt Parkes (right) is possibly Second Lieutenant (2nd Lt) Percy George Rupert Parkes, 23rd Battalion. A salesman from Colac, Victoria, prior to enlistment, 2nd Lt Parkes embarked with A Company from Melbourne aboard HMAT Euripides (A14) on 10 May 1915. During his service he reached the rank of Captain and was awarded a Military Cross (MC) and Bar. He returned to Australia on 13 April 1919. Sgt Maj Miller is possibly 45 Regimental Sergeant Major (later Warrant Officer) Thomas Millar, 23rd Battalion. An upholsterer prior to enlistment, Millar embarked with Headquarters from Melbourne aboard HMAT Euripides (A14) on 10 May 1915. During his service he was promoted to Second Lieutenant, then Lieutenant and finally Captain following a transfer to the 22nd Battalion. He was awarded the Military Cross (MC) for his work at Passchendaele in September and October 1917. Captain Millar returned to Australia in late 1919. Parkes and Millar also served in the Second World War. This is one of a series of photographs taken by the Darge Photographic Company which had a concession to take photographs at the Broadmeadows and Seymour army camps during the First World War. In the 1930s, the Australian War Memorial purchased the original glass negatives from Algernon Darge, along with the photographers' notebooks. The notebooks contain brief details, usually a surname or unit name, for each negative. The names are transcribed as they appear in the notebooks. See also P10699.002, a group portrait which includes 2nd Lt Percy George Parkes.