The Band of the 5th Australian Infantry Brigade, led by Bandmaster Sergeant A Peagam of the 19th ... 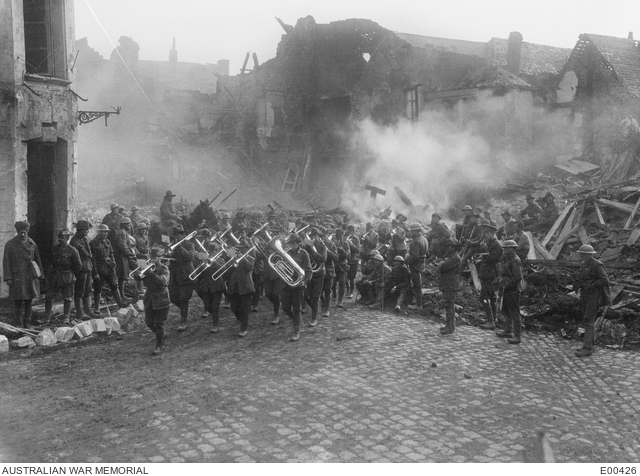 Of all the Australian Official Photographs, none gained wider publicity than this. This image was frequently reproduced during the war, featuring in numerous newspapers and the first catalogue of Official Photographs from the Western Front. It served as the centrepiece of the Australian section of a major exhibition on the imperial war effort held in London in 1918. However, there has long been suspicion that the event was staged for publicity. Sgt Gordon who had visited Bapaume to secure supplies for his unit later shared with his family that the fires, which had long since waned, were re-lit for effect. The logistical requirements of pulling instruments from storage behind the line and bandsmen from their units – noting the important role many played as stretcher bearers – lends weight to Sgt Gordon’s claims.