An Australian fatigue party from the 7th Brigade (far left) carrying piles of empty sandbags to ... 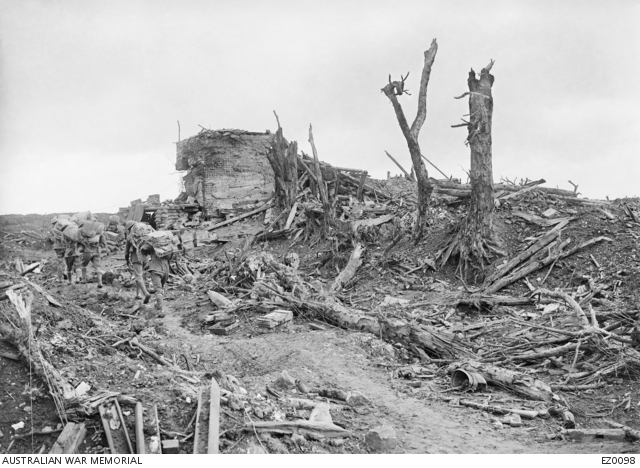 An Australian fatigue party from the 7th Brigade (far left) carrying piles of empty sandbags to the front line through the devastated area near Pozieres. The structure on the left is the remains of a German observation post, which stood on the western end of the village and was nicknamed 'Gibraltar' by the Australians. The post consisted of a concrete covered stairway down to a cellar from a house that formerly stood on the site and a larger, excavated chamber, and the whole housed three officers and 23 men. The occupants surrendered to a party from the 2nd Battalion on 23 July 1916 during the battle to wrest Pozieres from the Germans. Between 23 July and early September, the 1st, 2nd and 4th Divisions between them launched 19 attacks on German positions in and around the ruins of Pozieres.