Group portrait of patients and staff at the Military Families Hospital at Valetta, Malta. ... 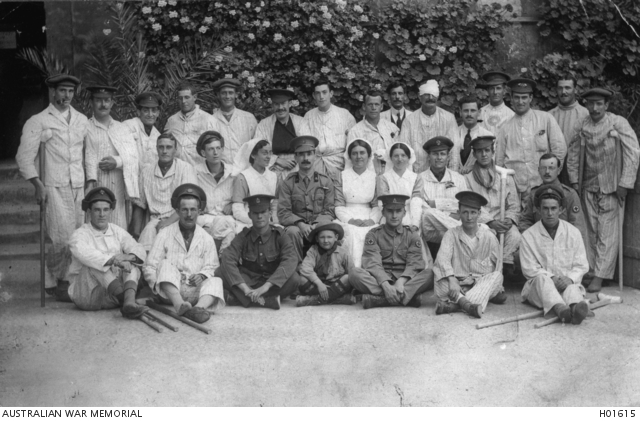 Group portrait of patients and staff at the Military Families Hospital at Valetta, Malta. Standing fourth from the right is 720 Lance Corporal (L Cpl) Harold George Mackay, 5th Battalion from East Melbourne, Victoria. A 26 year old ironmonger prior to enlisting on 18 August 1914, he embarked for overseas with D Company from Melbourne on 21 October 1914 aboard HMAT Orvieto. While serving at Gallipoli, he was wounded in action and evacuated to Malta for medical treatment. After recovering from his wounds, he returned to his unit at Gallipoli and then went on to serve on the Western Front. He was promoted to Corporal on 11 August 1915 and to Sergeant on 1 September 1915. He was appointed a Second Lieutenant on 26 April 1917 and a Lieutenant (Lt) on 28 September 1917. Lt Mackay arrived back in Australia on 27 December 1919. [See also images H01616 and H01617.]