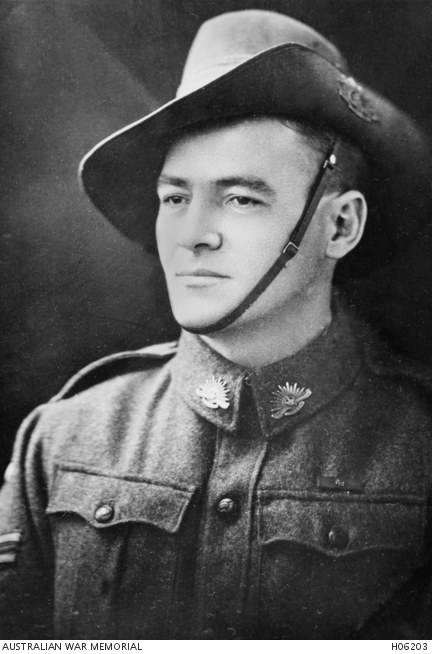 Studio portrait of 2389 Corporal (Cpl) Jorgan Christian Jensen VC, 10th and later 50th Battalion, from Port Pirie, South Australia. Born in Denmark, he was a 24 year old labourer when he enlisted in the AIF on 23 March 1915 and he embarked for overseas service as a private (Pte) with the 6th Reinforcements of the 10th Battalion from Adelaide aboard HMAT Borda (A30) on 23 June 1915. He served at Gallipoli with the 10th Battalion and on returning to Egypt, transferred to the 50th Battalion and went with them to France in June 1916. After being wounded in action on 14 August 1916, he was evacuated to England for medical treatment and recuperation for the next five months. Pte Jensen was awarded the Victoria Cross for "most conspicuous bravery and initiative when, with five comrades, he attacked a barricade behind which were about forty-five of the enemy and a machine gun" on 2 April 1917 at Noreuil, France. After rushing the enemy machine gun post and throwing in a bomb, Pte Jensen threatened them with two live bombs telling them they were surrounded and inducing them to surrender. He then sent one of the prisoners to a nearby post to tell them to surrender, which they did. The second group of prisoners was then fired upon, prompting Pte Jensen to stand on a barricade waving his helmet causing the firing to cease. He was promoted to Lance Corporal on 4 April and to Corporal on 4 July 1917. Cpl Jensen spent three months, from July 1917 with the 13th Australian Training Battalion and the School of Musketry in the United Kingdom. Seven months after returning to the 50th Battalion in France, he was wounded in action near Villers Bretonneux on 5 May 1918 and again evacuated to England for medical treatment. He arrived back in Australia on leave on 11 October 1918 and died on 31 May 1922.