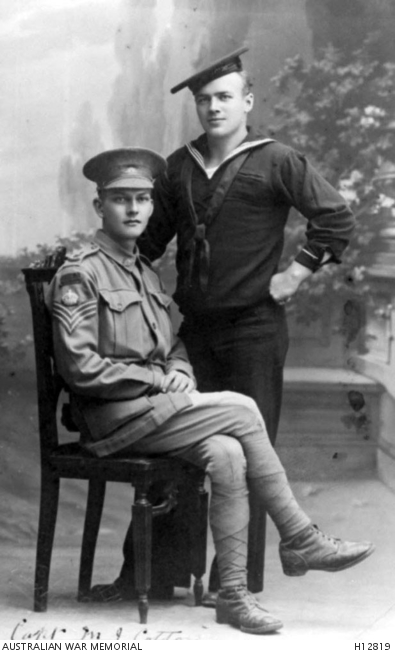 Studio portrait of 24 Sergeant Major Malcolm John Bernard Cotton, 2nd Battalion from East Maitland, NSW and an unidentified sailor from the American Navy cruiser Caroline. A 19 year old public servant prior to enlisting in the AIF on 18 August 1914, Cotton embarked for overseas as a Colour Sergeant with A Company from Sydney on 18 October 1914 aboard HMAT Suffolk. After being promoted to Second Lieutenant at Gallipoli on 4 August 1915, he was wounded in action four days later and evacuated to Cairo hospital for medical treatment. He recovered from his wounds and rejoined his unit on 12 October 1915. Later while serving in France, he was promoted to Captain on 16 April 1916 and was then killed in action at Pozieres on 24 July 1916. His name is inscribed on the Villers-Bretonneux Memorial, France with others who have no known grave.