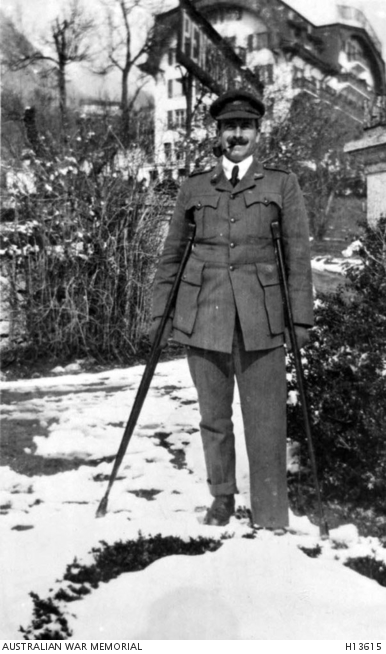 Outdoor portrait of Australian prisoner of war (POW) Lieutenant (Lt) Cyril Bernard Meyer, 13th Battalion in the grounds of the Pension Morier, Chateau D'Oex, Switzerland where he was interned. He is seen walking with the aid of a cardboard artificial leg which had been constructed by Lady Marjorie Dalrymple whilst on holiday leave from France. Lt Meyer was a 34 year old commercial traveller from Double Bay, NSW when he enlisted and embarked for overseas from Sydney on 20 December 1915 aboard HMAT Aeneas. He was wounded and captured near Pozieres, France on 14 August 1916 and while interned in Germany had his left leg amputated. On 13 December 1916 he was transferred to Switzerland for internment as an incapacitated combatant prisoner. Lt Meyer arrived back in Australia on 16 April 1918. (Donor C.B. Meyer)