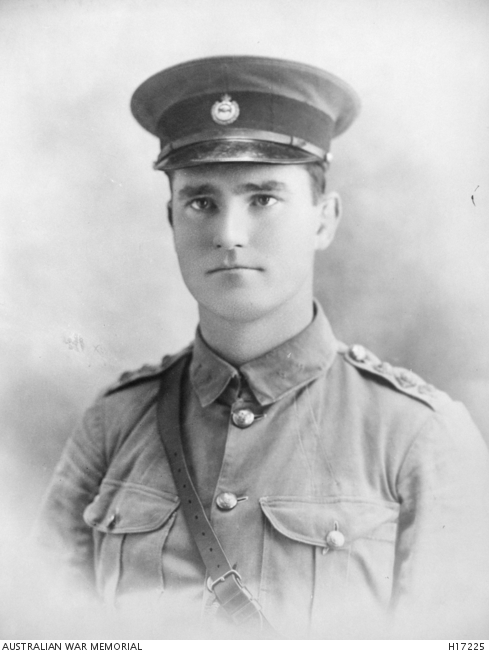 Studio portrait of Captain Hugh Quinn, Australian Naval and Military Expeditionary Force (AN&MEF) from Charters Towers, Queensland. He is wearing the uniform of the AN&MEF with the cap and cap badge from the Queensland militia Kennedy Regiment. He was a 26 year old public accountant and auditor prior to being appointed a Captain in the 2nd AN&MEF in September 1914. The force had been raised to capture the then German New Guinea, however, his participation in this action was short-lived, as a mutiny of the crew of his transport ship Kanowna led to the ship being recalled before he saw any action. After returning to Australia, he was appointed a Captain in the AIF on 28 September 1914 and embarked for overseas with E Company, 15th Battalion from Melbourne on 22 December 1914 aboard HMAT Ceramic. He landed at Gallipoli late in the afternoon of 25 April 1915 and in subsequent weeks served with the battalion in establishing and defending the ANZAC front line. His abilities in these actions saw his promotion to Major on 1 May 1915. Major Quinn was killed in action on 29 May 1915 and the place of his death became known as Quinn's Post in recognition of his service. He is buried in Shrapnel Valley Cemetery, Gallipoli, Turkey. [See also image H17420]