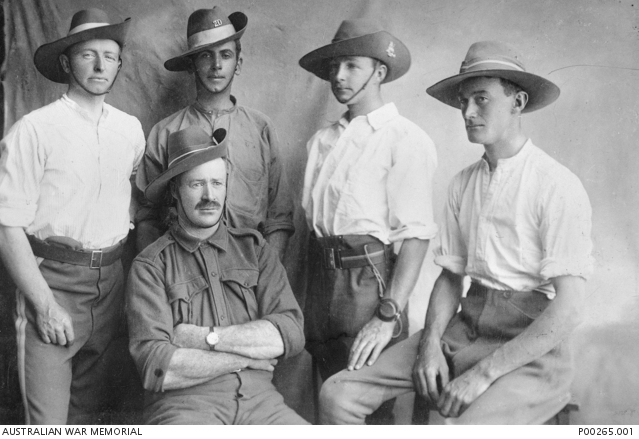 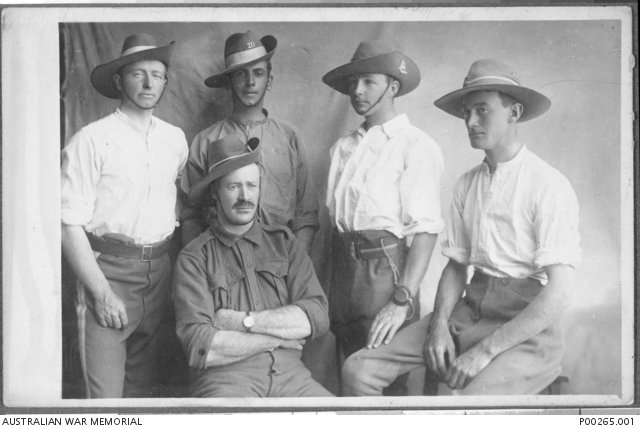 Pre-war studio portrait of five officers of the Australia Light Horse (Militia). Identified, standing from left to right: Major (Maj) Thomas Harold Redford from Warrnambool, Victoria; Lieutenant (Lt) Edward Ellis Henty from Hamilton, Victoria; and Lt Eliot Gratton Wilson from Warrnambool. Seated, from left to right: Lt Robert Ernest Baker from Larpent, Victoria and Lt Keith Allan Borthwick from Armadale, Victoria. All officers later joined the AIF and embarked for overseas with B Squadron 8th Australian Light Horse Regiment from Melbourne on 25 February 1915 aboard HMAT Star of Victoria. Maj Redford and Lts Henty, Wilson and Borthwick all joined the AIF on 21 September 1914 and were all killed in action at Gallipoli on 7 August 1915 at the disastrous attack on The Nek. Maj Redford is buried at Walkers Ridge Cemetery and Lt Henty is buried at Ari Burnu Cemetery, Gallipoli, Turkey. Lts Wilson and Borthwick are commemorated on the Lone Pine Memorial, Gallipoli with others who have no known grave. Lt Baker joined the AIF on 24 October 1914 and embarked with the other officers in the image. He was taken ill in September 1915 and evacuated to Malta for medical treatment before being returned to Australia, arriving on 14 January 1916. He was discharged medically unfit on 25 March 1916 but the next day was appointed a Lieutenant and Adjutant for the voyage of HMAT Orontes to Suez and return to Australia. He embarked again as Adjutant aboard HMAT Port Lincoln in October 1916, returning to Australia in April 1917.