Outdoor portrait of two officers of the Australian Flying Corps, probably at Yatesbury, UK. A ... 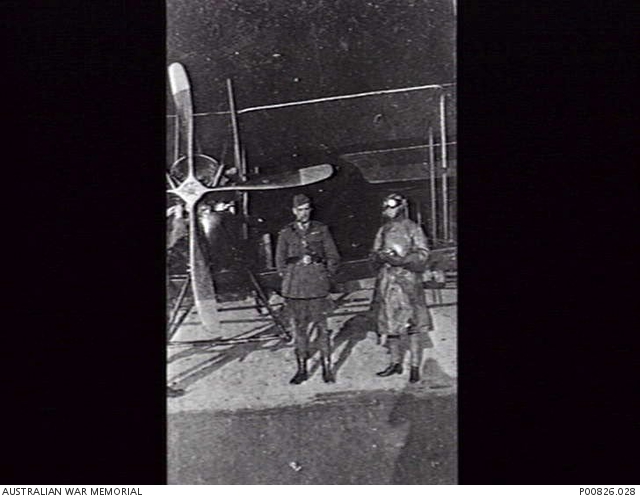 Outdoor portrait of two officers of the Australian Flying Corps, probably at Yatesbury, UK. A Royal Aircraft Factory BE2E aircraft undergoing repair stands behind them. Identified on the left is Captain Henry Douglas Eyre Ralfe, from Sydney, NSW. He served in the Royal Australian Garrison Artillery from 1911 and gained his Aviators' Certificate (No 1419) at the Central Flying School on 12 May 1915. He enlisted in the AIF at the age of 25 on 21 May 1915 and was appointed a Lieutenant in the Siege Artillery Brigade [see image PB1402]. He embarked for overseas from Melbourne on 17 July 1915 aboard HMAT Orsova and after serving with the Artillery in Egypt, he was promoted to Captain and transferred to England on 10 August 1916 for duties with the Australian Flying Corps (AFC). On 16 December 1916 he was transferred to No 69 Squadron AFC to be the Flight Commander. Captain Ralfe was killed in action in France on 6 May 1918 and is buried in the Vignacourt British Cemetery, France. [See also image DAD0001.] On the right is Lieutenant Aitken who had not been further identified.