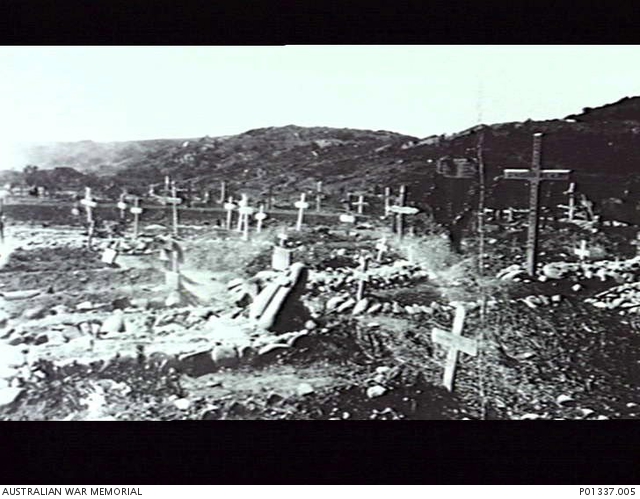 Graves of Australian soldiers at Shrapnel Gully Cemetery, Gallipoli. The tall wooden cross on the right marks the grave of 166 Sergeant (Sgt) Robert Henry Bulmer, 3rd Battalion. A pattern maker, of Campsie, New South Wales prior to enlistment in the 1st Field Ambulance, Australian Army Medical Corps, he embarked from Sydney aboard HMAT Euripides on 20 October 1914 for Egypt and then to the Dardanelles where he was transferred to the 3rd Battalion. Sgt Bulmer was killed in action on the Gallipoli Peninsula on 16 July 1915 and is buried in Shrapnel Valley Cemetery. He was aged 25 years. His younger brother, 3884 Private Walter Edgar Bulmer was killed in action at Pozieres, France, on 22 August 1916 (see P05301.171) and his youngest brother, 6523 Lance Corporal Edward William Bulmer, returned to Australia on 7 July 1919.