Informal portrait of two Prisoners of War (POW) performers on stage in a POW production titled ... 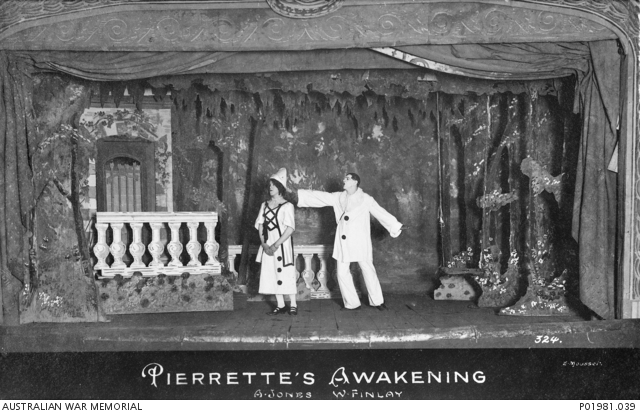 Informal portrait of two Prisoners of War (POW) performers on stage in a POW production titled ‘Pierrette’s Awakening’ at a POW camp at Soltau, Hannover, Germany. Identified on the left, dressed as a woman, is 3097 Private (Pte) Albert Jones, 17th Battalion, from Erskineville, NSW, and on the right is 6736 Pte Matthew Watson Finlay, 13th Battalion, from Sydney, NSW. Pte Jones enlisted at the age of 33 on 31 August 1915 and embarked for overseas on 20 December 1915 aboard HMAT Suevic. He was captured at Fleurbaix, France, on 20 July 1916 and held as a POW in Germany until repatriated to England on 11 December 1918. Pte Jones arrived back in Australia on 24 March 1919. Pte Finlay enlisted on 10 June 1916 and embarked for overseas on 8 November 1916 aboard SS Port Nicholson. He was captured at Riencourt, France, on 11 April 1917 and held as a POW until repatriated to England on 26 December 1918. Pte Finlay arrived back in Australia on 17 April 1919. One of a series of over 400 photographs sent by Australian POWs in German camps to Miss M. E. Chomley, Secretary, Prisoners Department, Australian-British Red Cross Society, London. Original album housed in AWM Research Centre at RC00864, Album image number 258.