Studio portrait of two athletes with the trophies and ribbons they won in the Garrison and ... 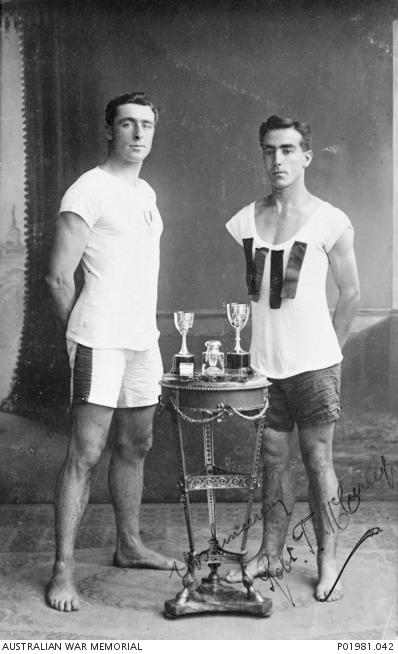 Studio portrait of two athletes with the trophies and ribbons they won in the Garrison and Colonial Sports held at their Prisoner of War (POW) camp in Holland (The Netherlands). The soldier on the left has been identified as 99 Corporal (Cpl) Walter Ernest Devenish (alias Gunner Walter Ernest Holman), 5th Machine Gun Battalion, from Perth, Western Australia, and the soldier on the right is 2557 Sergeant (Sgt) Robert Thomas McCurley, 54th Battalion, from Molong, NSW. The handwritten note on the back of the photograph reads: “Dear Miss Chomley, This is a photo of Gunner Holman and myself (the smaller of the two). Holman won the best average at Garrison Sports & I at Colonial Sports, but I think you know that our uniforms have not arrived yet but I suppose they’ll come along soon now. Yrs Sincerely Rob. T. McCurley.” Walter Devenish enlisted in the Royal Australian Navy (RAN) on 26 April 1913 but deserted on 28 June 1915. He subsequently enlisted in the AIF as Walter Ernest Holman on 12 July 1915 at the age of 21 and embarked for overseas with the 31st Battalion on 9 November 1915 aboard HMAT Wandilla. After being wounded in the right leg, he was captured at Fleurbaix, France, on 20 July 1916. Cpl Devenish was held as a POW in Germany until repatriated to Holland on 5 July 1918. He arrived in England on 18 November 1918 and arrived back in Australia on 24 December 1919. Sgt McCurley enlisted at the age of 24 on 22 May 1915 and embarked for overseas with the 2nd Battalion on 9 August 1915 aboard HMAT Runic. Following service at Gallipoli, he went on to serve on the Western Front where he was also wounded and captured at Fleurbaix, on 20 July 1916. Sgt McCurley wrote from his POW camp at Dulmen, Germany on 20 August 1916 to the Chief Inspector of Police in London as follows: “Sir, Kindly excuse me but I’m an Australian Prisoner of War. My father is Sgt. G.W. McCurley, Police Stn. Molong, N.S.Wales. Having lost the address of English friends and relatives I was wondering if you would be good enough to give my name to some Police Comfort Fund from which I could receive a weekly parcel of eatables, if so I would like it to contain such as flour, baking powder, dripping, jam and syrup, biscuits. Sgt. R.T. McCurley, 2557.” He was repatriated to Holland on 13 June 1918, arrived in England on 18 November 1918 and arrived back in Australia on 23 April 1919. One of a series of over 400 photographs sent by Australian POWs in German camps to Miss M. E. Chomley, Secretary, Prisoners Department, Australian-British Red Cross Society, London. Original album housed in AWM Research Centre at RC00864, Album image number 276.