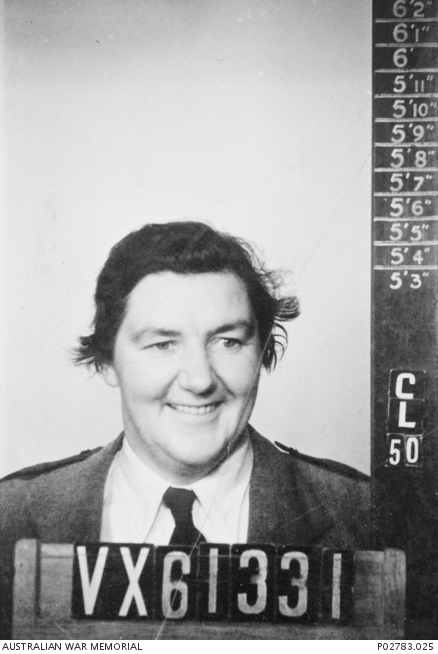 Vic. Paybook photograph, taken on enlistment, of VFX61331 Lieutenant Gladys Laura Hughes, 2/13th Australian General Hospital, Australian Army Nursing Service (AANS). She was one of sixty five Australian nurses and over 250 civilian men, women and children evacuated on the Vyner Brooke from Singapore three dyas before the fall of Malaya. The Vyner Brooke was bombed by Japanese aircraft and sunk in Banka Strait on 14 February 1942. Of the sixty five nurses, twelve were lost at sea, twenty two survived the sinking and were washed ashore on Radji Beach, Banka Island, where they surrendered to the Japanese along with twenty five British soldiers. On 16 February 1942 the group was massacred, the soldiers were bayoneted and the nurses were ordered to march into the sea where they were shot. Only Sister Vivian Bullwinkel and a British soldier survived the massacre. Both were taken POW, but only Sister Bullwinkel survived the war. Sister Hughes was one of the remaining thirty two nurses who also survived the sinking and were captured as POWs, eight of which later died in captivity. Sister Hughes, aged 33, died of illness on 31 May 1945 in Sumatra. She was the daughter of James Hughes of West Brunswick, Vic. (Photograph copied from original photograph attached to attestation form, lent by Central Army Records Office.)