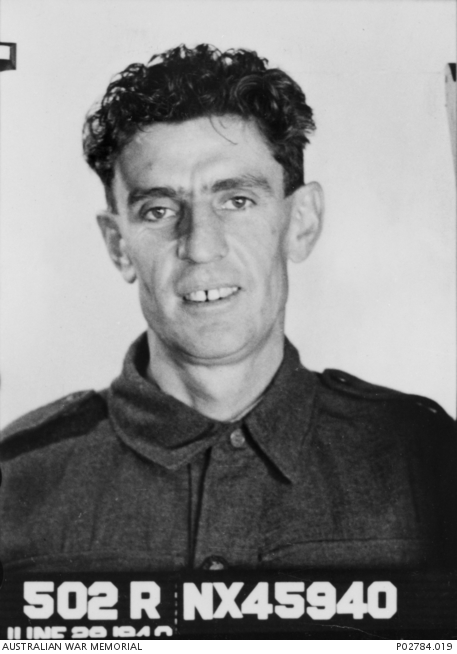 NSW. Paybook photograph, taken on enlistment of NX45940 Private William Thomas Theodore Cant, 2/29 Battalion. He was one of 145 men who were massacred by the Japanese at Parit Sulong on 22 January 1942 during the Malaya Campaign when wounded Australian and Indian soldiers were left behind by withdrawing troops after the Battle of Muar. They were rounded up by the Japanese and forced to surrender all of their belongings including their clothes, which were later returned. The men, now Prisoners of War (POWs) were beaten, tormented and denied food, water and medical attention. At sunset on the night of 22 January 1942, the men were roped or wired together in groups and led into the jungle where they were shot with machine guns, doused with petrol and set alight. Only Lieutenant Ben Charles Hackney and VX52333 Reginald Arthur Wharton survived, feigning death despite repeated brutalities by the Japanese. Private Cant, aged 33, was the husband of Priscilla Florence Cant of NSW. (Photograph copied from original attestation form lent by the Central Army Records Office)