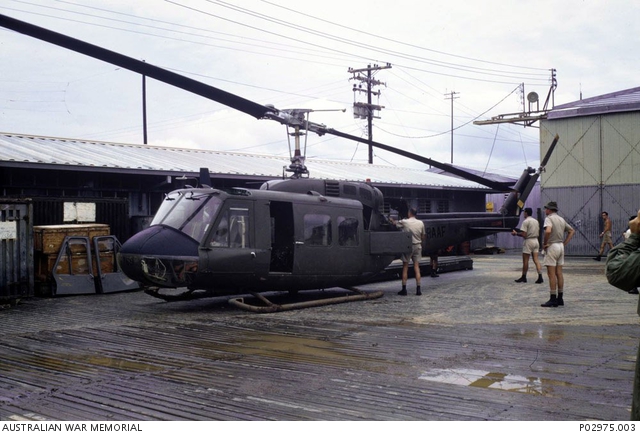 Bell Iroquois UH-1H helicopter serial number A2-769 of 9 Squadron RAAF undergoing inspection after recovery to the squadron maintenance area at Vung Tau military airfield, following an engine failure and forced landing six kilometres west of Ap Suoi Nghe. The aircraft was initially assessed as having sustained category four damage (write-off) and was recovered as a slung load by a US Army Boeing Vertol CH-47 Chinook helicopter (not in view). Those airmen in the vicinity are probably air frame fitters noting repairs needed to make it airworthy again. This helicopter was subsequently rebuilt by a local US Army aircraft maintenance facility. In October 1969, the aircraft also crashed again and it was destroyed at the site by a demolition team.