A Bell Iroquois UH-1H helicopter of 9 Squadron RAAF hovering out of the squadron's revetments at ... 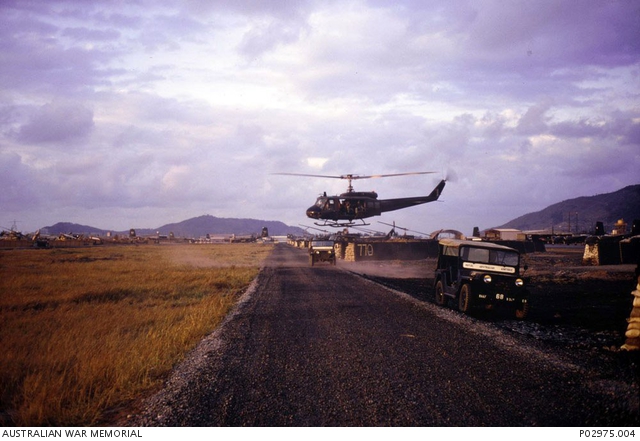 A Bell Iroquois UH-1H helicopter of 9 Squadron RAAF hovering out of the squadron's revetments at the Vung Tau military airfield. The vehicle in the foreground is a RAAF jeep, as also could be the vehicle beyond the hovering helicopter. On the extreme right in the middle-distance can be seen the tails of two de Havilland Canada, DHC-4 Caribou aircraft of 35 Squadron RAAF, while in the centre to left middle-distance can be seen other aircraft, probably USAF, including at least one Caribou. On the skyline left of centre is the Nui Nho feature which lies immediately south of the town of Vung Tau, while on the right skyline, immediately north of Vung Tau, are the southern slopes of Nui Lon ('Radar Hill'). Vung Tau was some three kilometres south west of the airfield.