A burning fuel tank in the bulk storage area adjacent to the Vung Tau military airfield at about ... 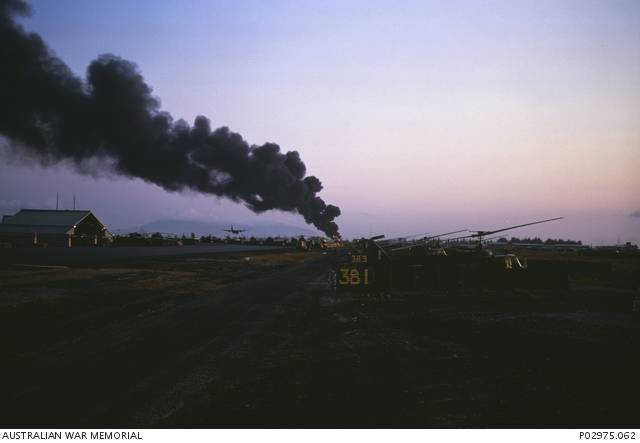 A burning fuel tank in the bulk storage area adjacent to the Vung Tau military airfield at about 9.30 am, some thirty minutes after an enemy attack. 300 000 gallons of fuel were lost in the blaze caused by three Viet Cong 122 mm rockets which hit the fuel dump. Helicopters on the airfield and a hangar can be seen in the foreground, and a Lockheed C-130 Hercules aircraft, just above the skyline, is on a landing approach. All told, six 122 mm rockets were fired from Long Son Island, some ten km to the north north west. Two other rockets damaged a US Army Boeing Vertol CH-47 Chinook helicopter yet there were no casualties among RAAF personnel. South Vietnamese artillery retaliated against suspected launch sites, and a sweep of the area on Long Son Island later revealed two enemy bodies killed by artillery. (Black and white version of the same image is held at P01957.007)