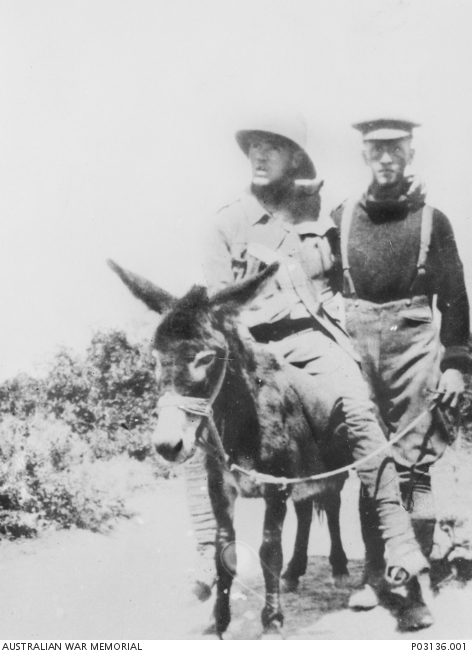 3/258 Pte Richard Alexander (Dick) Henderson, a stretcher bearer in the New Zealand Expeditionary Force serving on Gallipoli, with a donkey assisting a wounded soldier from the front line at Anzac. Pte Henderson survived Gallipoli and went on to serve in France where he was awarded the Military Medal in November 1916, he was promoted to Lance Corporal and eventually Corporal on 23 March 1917. Pte Henderson was very seriously gassed in October 1917 and repatriated to England where he was reported as "dangerously ill". He was declared unfit for war service and embarked for New Zealand from Liverpool on 2 February 1918. For many years this photograph was thought to be of 202 Private (Pte) John Simpson Kirkpatrick, who enlisted as John Simpson. The evocative image of a stretcher bearer and his donkey at Gallipoli carrying wounded down from the front line achieved much fame, and Pte John Simpson became known as, "The Man with the Donkey". There are at least six known paintings, based on this photograph by the New Zealand artist Horace Moore-Jones, who also served on Gallipoli in the New Zealand Army, and reproductions of his paintings were widely distributed as being an excellent portrait of Simpson. One of these paintings in held in the collection of the Australian War Memorial (Art92147). Later research has found that this photograph was taken by 3/210 Sergeant James (Jas) G. Jackson, New Zealand Expeditionary Force, and shows not Simpson, but Pte Dick Henderson. (Inferior image held as A01011)