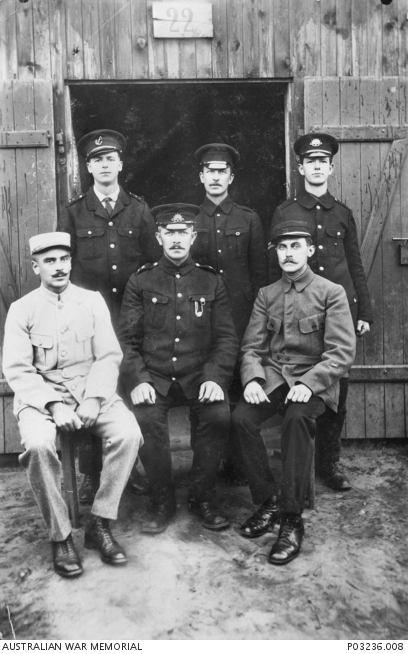 Outdoor portrait of six Allied Prisoners Of War (POW) at Schneidemuhl POW camp, Posen, Germany. Identified back row far left, 1143 Private (Pte) David Burn Storey, 30th Battalion, from Elsternwick Victoria; back row far right, 3235 Corporal (Cpl) James Skelly, 55th Battalion, from Rockdale NSW; front row centre, 4854 Pte Robert Montgomery, 55th Battalion, from Auburn NSW. Pte Storey enlisted on 1 July 1915 and embarked for overseas on 9 November 1915 aboard HMAT Beltana. He was reported missing and then later confirmed as a POW in 1916. Pte Storey was transferred to Switzerland in November 1917, repatriated to England in March 1918 and embarked to return to Australia in July 1918. Note Pte Storey is wearing a borrowed cap. Cpl Skelly enlisted at the age of 21 on 9 August 1915 and embarked for overseas on 30 December 1915 aboard HMAT Suevic. He was captured at Laventie, France on 20 July 1916 and held in POW camps in Germany until he was repatriated to Holland on 13 June 1918. He arrived in England on 22 November 1918. Cpl Skelly embarked to return to Australia on 5 March 1919 and was discharged on 20 June 1919. Pte Montgomery enlisted on 23 September 1915 and embarked for overseas on 8 March 1916 aboard HMAT Star of England. He was captured at Fleurbaix, France on 20 July 1916 and held as a POW until he was repatriated to England in December 1918. He embarked to return to Australia in January 1919. One of a series of over 400 photographs sent by Australian POWs in German camps to Miss M. E. Chomley, Secretary, Prisoners Department, Australian-British Red Cross Society, London. Original album housed in AWM Research Centre at RC00864, Album image number 18.