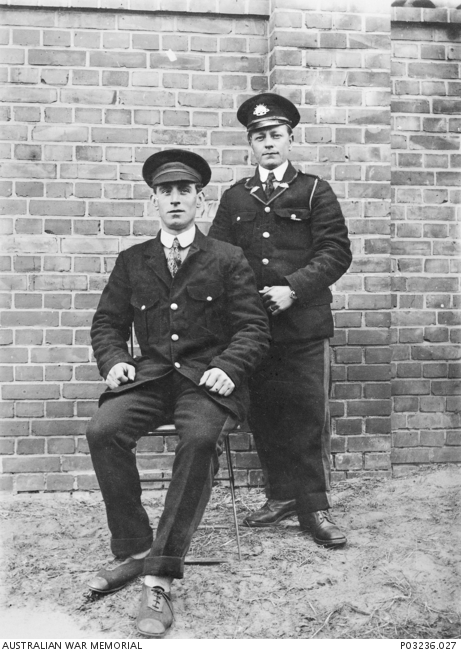 Outdoor portrait of two Prisoners of War (POW) S. Christian (sitting) and 4922 Private (Pte) Alfred Charles Stokes, 53rd Battalion, from Sydney NSW taken at Schneidemuhl POW camp in Posen, Germany. Pte Stokes enlisted at the age of 24 on 4 September 1915 and embarked for overseas on 8 March 1916 aboard HMAT Star of England. He was captured at Fleurbaix, France on 20 July 1916 and held as a POW in Germany until he was repatriated to England on 25 December 1918. In August 1918 he wrote from POW Camp Schneidemuhl "I am still jogging along and in the best of health. I am still working in the forests. The parcels are coming a little irregularly lately, but I suppose they will liven up again later." Pte Stokes arrived back in Australia on 28 November 1919. One of a series of over 400 photographs sent by Australian POWs in German camps to Miss M. E. Chomley, Secretary, Prisoners Department, Australian-British Red Cross Society, London. Original album housed in AWM Research Centre at RC00864, Album image number 39.