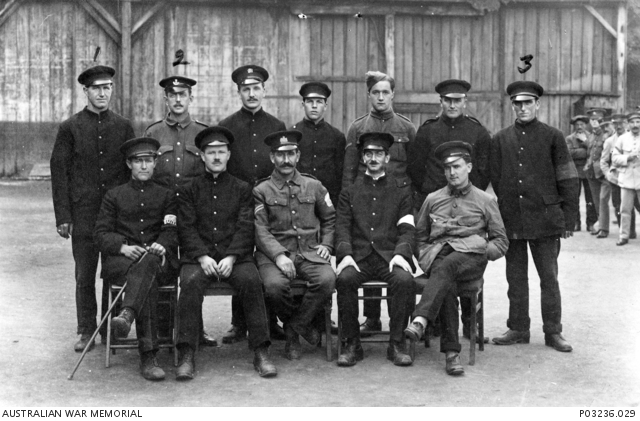 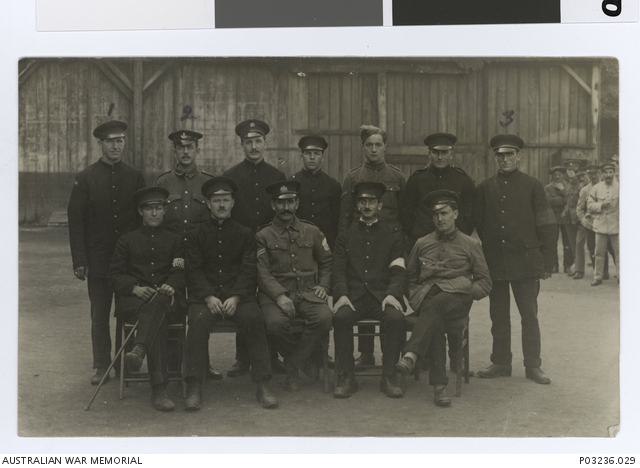 Outdoor portrait of three Australian and nine Canadian Prisoners of War (POW) at Stuttgart POW camp, Germany. Australians are, standing on far left 969 Lance Corporal (L/Cpl) Robert Johnston, 32nd Battalion, from Victoria Park, Western Australia; standing second from left, 2786 Corporal (Cpl) Arthur Donald Bowen, 54th Battalion, from Sydney, NSW; and standing on far right, 1611 Private (Pte) James Butler, 32nd Battalion, from Subiaco, Western Australia. L/Cpl Johnston enlisted at the age of 22 on 12 July 1915 and embarked for overseas on 18 November 1915 aboard HMAT Geelong. His parents were told that he had been killed in action but they later received a post card from him from a POW camp in Germany; he had been wounded and captured at Fleurbaix, France, on 19 July 1916 and was held as a POW until repatriated to England on 19 December 1918. L/Cpl Johnston arrived back in Australia on 15 June 1919. Cpl Bowen enlisted at the age of 26 on 26 June 1915 and embarked for overseas on 30 September 1915 aboard HMAT Argyllshire. He was captured at Fleurbaix, France on 18 July 1916 and held as a POW in Germany until he was repatriated to England via Holland, arriving on 18 November 1918. He wrote from Stuttgart POW camp on 1 January 1918 "All the new arrivals of the Australians in this camp have received most of their parcels as we have had a big delivery of parcels that have been delayed on the way, on account of their being moved about so much. We all enjoyed our Christmas with our concerts etc, which the new arrivals enjoyed very much. Their first treat to a 'Sing-Song' since they have been captured." Cpl Bowen arrived back in Australia on 17 April 1919. Pte Butler enlisted on 13 September 1915 and embarked for overseas on 18 November 1915 aboard HMAT Geelong. He was captured on 18 July 1916 and held in German POW camps until the end of 1917 when he was exchanged through Switzerland. He wrote on 29 November 1917 from Hotel Berthod, Chateau d'Oex Switzerland "I was eight weeks waiting at Konstanz to be exchanged. We had some starvation while waiting, we got a grand reception here, in fact we had four as we got one at Zurich, at Berne, at Montreux and here and it was grand after Germany." He arrived in London in December 1918 and embarked to return to Australia in March 1919. Handwritten note on back of photograph reads "Names reading from left to right: Back row Lcpl Johnson, Cpl Bowen, Priv Cannon, Pt Labbe, Lcpl Duncan, Pt Ward, Pt Butler. Front Row Pt Crawford, Pt Patterson, Cpl Bromley, Pt Brown, Pt Gallagher. All colonials. 3 Australians & 9 Canadians." One of a series of over 400 photographs sent by Australian POWs in German camps to Miss M. E. Chomley, Secretary, Prisoners Department, Australian-British Red Cross Society, London. Original album housed in AWM Research Centre at RC00864, Album image number 41.