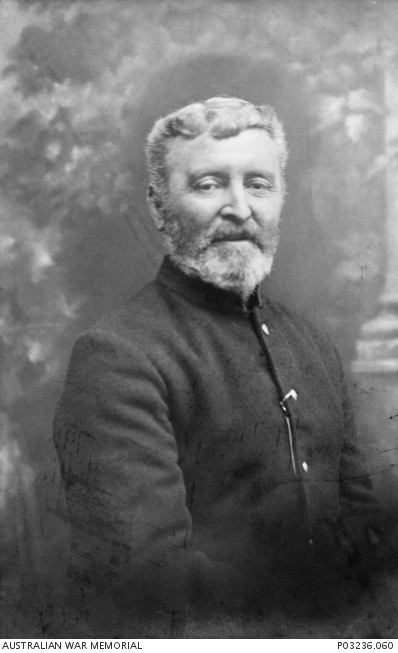 Studio portrait of Australian Prisoner of War (POW) 3339 Private (Pte) John Francis Killalea, 53rd Battalion, from Surry Hills, NSW, at German POW camp Munster, Germany. Pte Killalea enlisted at the age of 43 on 15 August 1915 and embarked for overseas on 2 November 1915 aboard HMAT Euripides. He was captured at Fleurbaix, France on 20 July 1916 and held as a POW. During his captivity, he wrote to the Australian Red Cross in London "With great pleasure I write these few lines to acknowledge the kindness received from you and the Australian B.R.C.S. It makes us Australians swell with pride when we receive our parcels of food and clothing and tobacco, as most of our comrades who have not had the luck to have been born in Australia are not quite so fortunate. Hoping before long we will have the pleasure of visiting you." Pte Killalea was repatriated to England on 14 December 1918 and arrived back in Australia on 26 March 1919. One of a series of over 400 photographs sent by Australian POWs in German camps to Miss M. E. Chomley, Secretary, Prisoners Department, Australian-British Red Cross Society, London. Original album housed in AWM Research Centre at RC00864, Album image number 82.