Outdoor portrait of a group of Prisoners of War (POW) at Stuttgart 2 POW camp. Identified ... 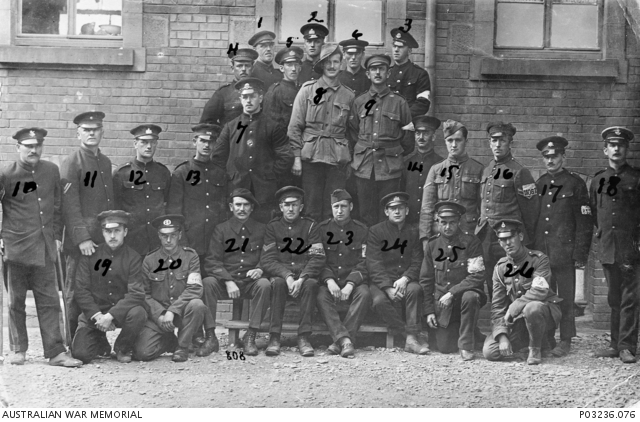 Outdoor portrait of a group of Prisoners of War (POW) at Stuttgart 2 POW camp. Identified standing second from right (number 17) is 2728 Private (Pte) George Gribbon, 55th Battalion, from Woonana, NSW. Pte Gribbon enlisted at the age of 20 on 13 April 1915 and embarked for overseas on 9 August 1915 aboard HMAT Runic. After serving at Gallipoli he went on the serve on the Western Front where he was wounded in the left shoulder and captured at Fleurbaix, France on 20 July 1916. In a letter written by Pte Gribbon from POW Camp Stuttgart 2, Germany in July 1918 he described the working condition in the camp as follows: "It is terrible, we have to work from 5.30 to 7 and 8 o'clock at night. In the dept we have to work from 7 to 6 and attend a parade at 9 o'clock at night. This is no pleasure - it is forbidden for a group to assemble together for a talk and the last few months I have not been in the best of health. My lungs are very sore and my feet so bad I can scarcely walk." Pte Gribbon was repatriated to England arriving on 19 December 1918 and arrived back in Australia on 1 June 1919. Handwritten note on back of photograph reads: "Miss E. Chomley, C/o Aust Brit Red Cross Sec., P. of W. Dept, 54 Victoria St, London S.W. With Kind regards Pte G. Gribbon." One of a series of over 400 photographs sent by Australian POWs in German camps to Miss M. E. Chomley, Secretary, Prisoners Department, Australian-British Red Cross Society, London. Original album housed in AWM Research Centre at RC00864, Album image number 101.