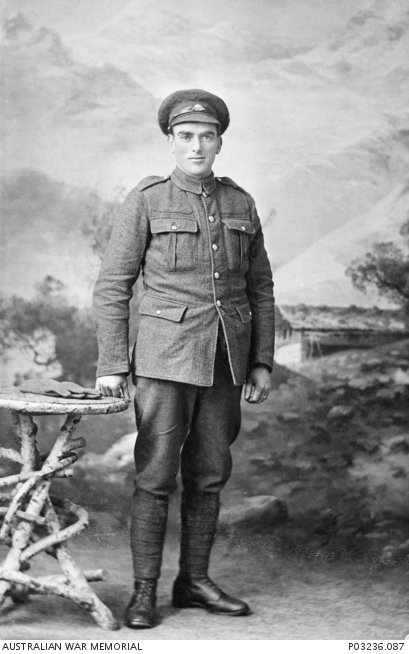 Studio portrait of Australian ex-Prisoner of War (POW) 1611 Private (Pte) James Butler, 32nd Battalion from Subiaco WA, taken at Chateau d'Oex, Switzerland. Pte Butler enlisted on 13 September 1915 at the age of 31 and embarked for overseas on 18 November 1915 aboard HMAT Geelong. He was wounded and captured at Fleurbaix, France on 18 July 1916 and held in German POW camps until he was transferred to Switzerland on 27 November 1917. Pte Bulter wrote from Chateau d'Oex in Switzerland "I was eight weeks waiting at Konstanz (Germany) to be exchanged. We had some starvation while waiting, we got a grand reception here, in fact we had four as we got one at Zurich, at Berne, at Montreux and here and it was grand after Germany." Pte Butler was repatriated to London on 7 December 1918 and arrived back in Australia on 10 April 1919. Handwritten note on back of photograph reads "Chateau d'Oex Jan 22nd 1918. With kind regards and all good wishes from yours Sincerely Pte J. Butler 32nd Batt A.I.F." One of a series of over 400 photographs sent by Australian POWs in German camps to Miss M. E. Chomley, Secretary, Prisoners Department, Australian-British Red Cross Society, London. Original album housed in AWM Research Centre at RC00864, Album image number 114.