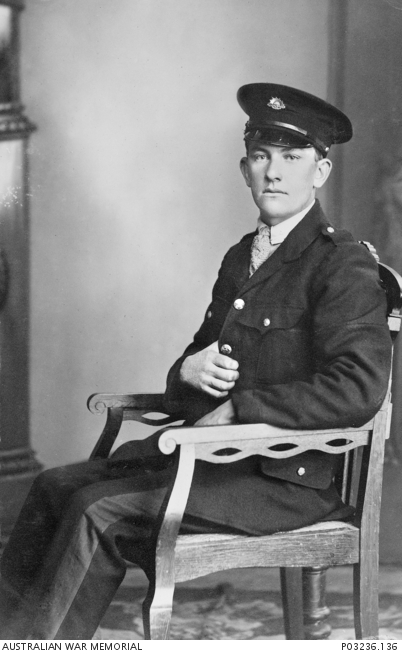 Studio portrait of Australian Prisoner of War (POW) 3539 Private (Pte) Norman Wilkinson, 54th Battalion, from Sydney NSW. Pte Wilkinson enlisted at the age of 18 on 4 August 1915 and embarked for overseas on 2 November 1915 aboard HMAT Euripides. He was captured at Fleurbaix, France on 20 July 1916 and interned at German POW Camp Dulmen and later transferred to a camp at Schneidemuhl. He was repatriated to England on 1 December 1918 and arrived back in Australia on 23 April 1919. One of a series of over 400 photographs sent by Australian POWs in German camps to Miss M. E. Chomley, Secretary, Prisoners Department, Australian-British Red Cross Society, London. Original album housed in AWM Research Centre at RC00864, Album image number 162.