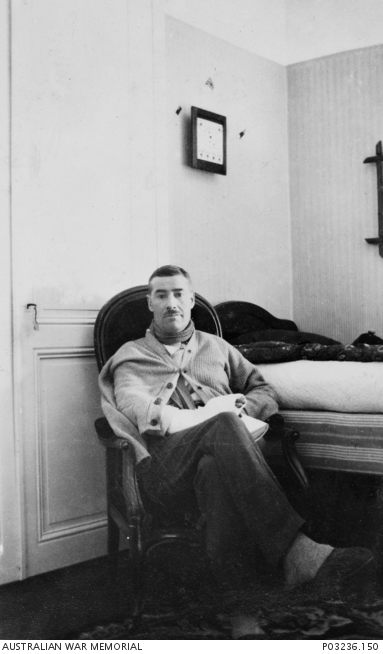 Indoor portrait of Australian Prisoner of War (POW) Captain (Capt) Charles Mills, 31st Battalion from Melbourne, Victoria, recuperating after his operation. Capt Mills enlisted on 12 August 1915 and embarked for overseas on 9 November 1915 aboard HMAT Wandilla. Having been wounded in the right arm and captured at Fleurbaix, France on 20 July 1916, he was held as a POW in Germany before being transferred to Switzerland in November 1917. He wrote from Switzerland on 8 February 1918 "I am writing with left hand. Right hand operated on last Thursday. All O.K. Stones and Wells getting on alright too." Capt Mills arrived in England in January 1919 and disembarked in Melbourne in December 1919. One of a series of over 400 photographs sent by Australian POWs in German camps to Miss M. E. Chomley, Secretary, Prisoners Department, Australian-British Red Cross Society, London. Original album housed in AWM Research Centre at RC00864, Album image number 176.