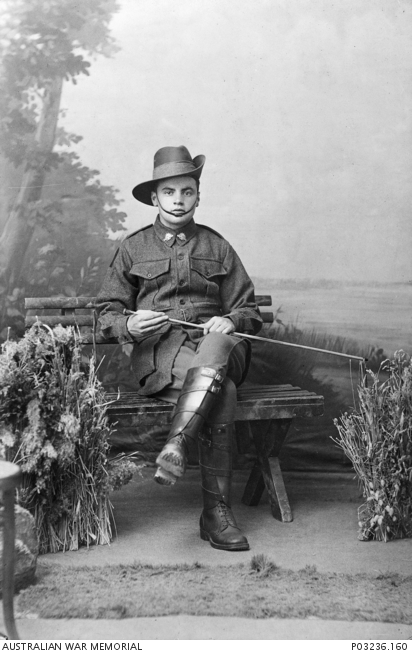 Studio portrait of Australian Prisoner of War (POW) 2734 Private (Pte) Colin Alexander Mitchell, 53rd Battalion, from Tempe NSW. Pte Mitchell enlisted on 17 August 1915, giving his age as 18 and embarked for overseas on 2 November 1915 aboard HMAT Euripides. He was captured at Fleurbaix, France on 20 July 1916 and held as a POW in camps in Germany. He wrote a letter from Schneidemuhl POW camp on 30 October 1917 stating "I have not been very well lately. I have been suffering a lot lately with my head and heart. I have been wounded with shrapnel in the head and I think that is the cause of it. I am at present in the Camp Hospital. I was very young when I left Australia. I am not yet 18, and this life has been playing a lot on my brains. I am sending you a photo of me I have been receiving my parcels better lately." Pte Mitchell was transferred to Holland on 7 May 1918, repatriated to England on 12 October 1918 and arrived back in Australia on 24 March 1919. One of a series of over 400 photographs sent by Australian POWs in German camps to Miss M. E. Chomley, Secretary, Prisoners Department, Australian-British Red Cross Society, London. Original album housed in AWM Research Centre at RC00864, Album image number 190.