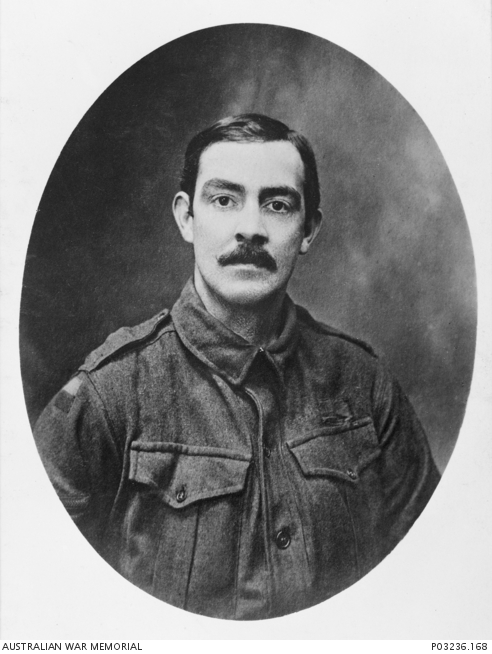 Studio portrait of Australian Prisoner of War (POW) 1741 Private (Pte) George Harold Freeman, 55th Battalion, from Tweed River, NSW. Pte Freeman enlisted at the age of 23 on 11 January 1915 and embarked for overseas on 17 March 1915 aboard HMAT Shropshire. He was wounded in action at Gallipoli and recovered to go on to serve on the Western Front where he was wounded in the shoulder and captured at Fleurbaix, France, on 29 July 1916. Pte Freeman was held as a POW until he was repatriated to England on 28 November 1918. He arrived back in Australia on 17 April 1919. Handwritten note on back of photograph reads "With kind regards to the A.R.Cross thanking them for their kindness of the past & sincerely hoping that their good work will not extend too far into the future. Geo. H. Freeman, 1741 55th Australians, Barrack 32, C/o Friedrichsfeld ¿bei Wesel, Rheinland, Germany." One of a series of over 400 photographs sent by Australian POWs in German camps to Miss M. E. Chomley, Secretary, Prisoners Department, Australian-British Red Cross Society, London. Original album housed in AWM Research Centre at RC00864, Album image number 200.