Outdoor portrait of three Romanian Prisoners of War (POW) in a POW camp at Stuttgart, Germany. ... 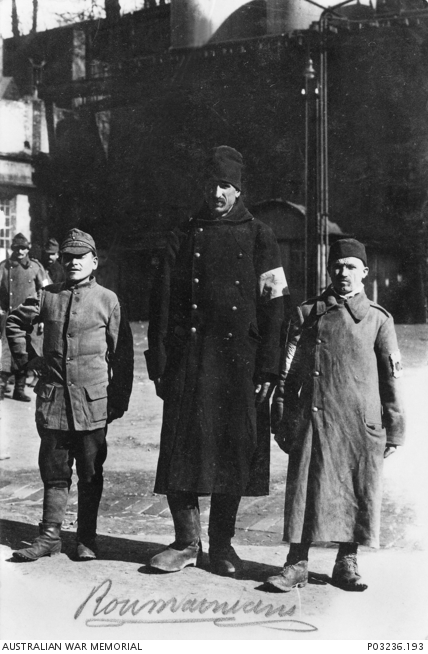 Outdoor portrait of three Romanian Prisoners of War (POW) in a POW camp at Stuttgart, Germany. Handwritten note on face of photograph reads ¿Roumanians¿. Handwritten note on back of photograph reads "Dear Sir, I received 5/- dated 10/4/17 for which I thank you. Cpl A.D. Bowen." Photograph was sent to the Australian Red Cross in London by 2786 Corporal (Cpl) Arthur Donald Bowen, 54th Battalion, from Sydney, NSW. Cpl Bowen enlisted at the age of 26 on 26 June 1915 and embarked for overseas on 30 September 1915 aboard HMAT Argyllshire. He was captured at Fleurbaix, France, on 18 July 1916 and held as a POW in Germany until he was repatriated to England via Holland, arriving on 18 November 1918. Cpl Bowen arrived back in Australia on 17 April 1919. One of a series of over 400 photographs sent by Australian POWs in German camps to Miss M. E. Chomley, Secretary, Prisoners Department, Australian-British Red Cross Society, London. Original album housed in AWM Research Centre at RC00864, Album image number 225.