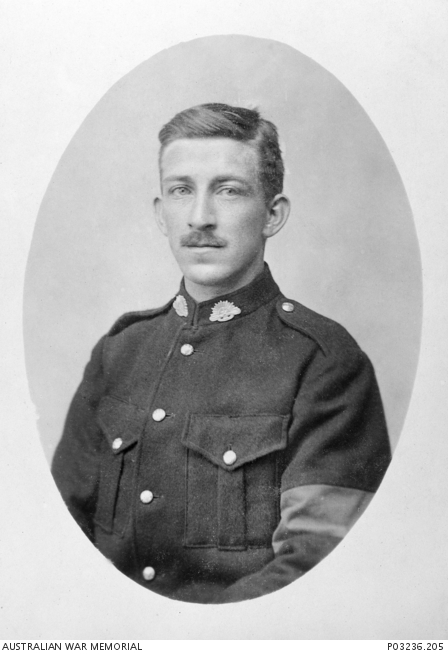 Studio portrait of Australian Prisoner of War (POW) 3536 Private (Pte) Charles Joseph McCue, 53rd Battalion, from Manly, NSW. Pte McCue enlisted at the age of 20 on 18 August 1915 and embarked for overseas on 2 November 1915 aboard HMAT Euripides. He was captured at Fleurbaix, France, on 20 July 1916 and interned at various German POW camps. He was repatriated to England in December 1918 and arrived back in Australia on 26 March 1919. He re-enlisted in the Army in the Second World War and served from 13 December 1939 to 29 September 1943. One of a series of over 400 photographs sent by Australian POWs in German camps to Miss M. E. Chomley, Secretary, Prisoners Department, Australian-British Red Cross Society, London. Original album housed in AWM Research Centre at RC00864, Album image number 243.