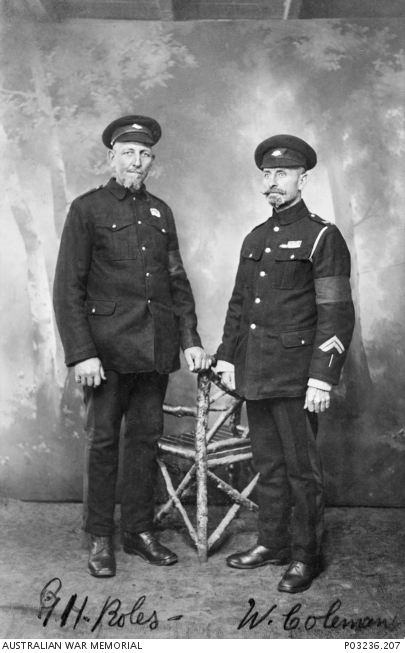 Studio portrait of two Australian Prisoners of War (POW) at Friedrichsfeld POW camp, Germany. On left is 3581A Private (Pte) George Henry Rolls, 53rd Battalion, from Inverell, NSW and on right is 5366A Pte William Arthur Coleman, 15th Battalion, from Brisbane, Qld, wearing a wound stripe and two service stripes on his left sleeve. Pte Rolls enlisted on 2 August 1915 at the age of 40 and embarked for overseas on 2 November 1915 aboard HMAT Euripides. He was captured at Fleurbaix, France on 19 July 1916 and held as a POW in Germany until repatriated via Holland to England, arriving on 25 November 1918. Pte Rolls arrived back in Australia on 26 April 1919. Pte Coleman enlisted on 22 November 1915 at the age of 39 and embarked for overseas on 20 April 1916 aboard SS Hawkes Bay. He received a slight wound in the head and was captured at Pozieres, France, on 27 August 1916. He was repatriated to England via Holland arriving on 25 November 1918 and was then admitted to King George Hospital, London. Pte Coleman arrived back in Australia on 8 May 1919. Handwritten note on back of photograph reads "Dear Miss Chomley, I am sending you a photo of myself and Pte Rolls. I hope you receive it - you can see by it that we are well up in years, yours faithfully, W. Coleman." One of a series of over 400 photographs sent by Australian POWs in German camps to Miss M. E. Chomley, Secretary, Prisoners Department, Australian-British Red Cross Society, London. Original album housed in AWM Research Centre at RC00864, Album image number 245.