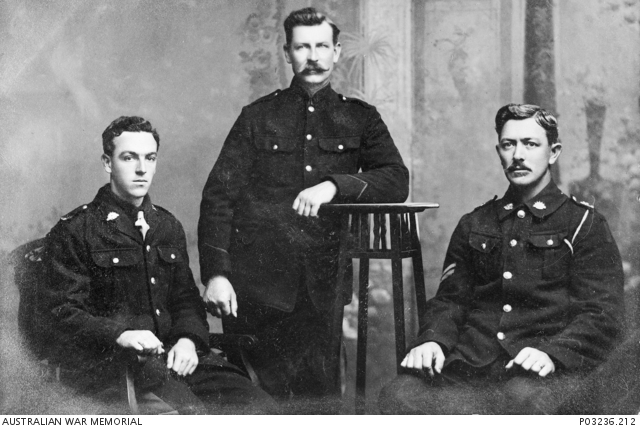 Studio portrait of three Australian Prisoners of War (POW) at Schneidemuhl POW camp Germany. Identified from left to right are 2012 Private (Pte) Harry Bruce Kyle, 16th Battalion, from Kalgoorlie, Western Australia, 1280 Pte Edgar Robert Watson Gardiner, 2nd Field Artillery Brigade, from Collingwood, Victoria and 4854 Corporal (Cpl) Robert Montgomery, 55th Battalion, from Auburn, NSW. Pte Kyle enlisted at the age of 18 on 18 February 1915 and embarked for overseas on 26 April 1915 aboard HMAT Hororata. He served at Gallipoli, and was captured at Riencourt, France on 11 April 1917 and held as a POW in a number of camps in Germany. He wrote from the POW Camp at Schneidemuhl on 26 May 1918 "Would you mind dropping my Mother a line telling her I am in the best of health and of course as happy as can be under the circumstances. My mother has only received three letters and I have not been receiving mine at all regularly." Pte Kyle was repatriated to England on 1 December 1918 and returned to Australia on 18 July 1919. Pte Gardiner enlisted at the age of 38 on 8 September 1914 and embarked for overseas on 20 October 1914 aboard HMAT Shropshire. He was captured at Lagnicourt, France on 15 April 1917 and held in various camps in Germany until repatriated to England on 1 December 1918. Pte Gardiner arrived back in Australia on 3 April 1919. Cpl Montgomery enlisted at the age of 34 on 23 September 1915 and embarked for overseas on 8 March 1916 aboard HMAT Star of England. He was captured at Fleurbaix, France on 20 July 1916 and held as a POW in Germany. He wrote from a POW camp at Schneidemuhl in January 1918 "My back is still troubling me. Personally I believe I am suffering from lumbago. The winter here this year does not appear to be so severe as the last, but still quite cold enough for the Australians. We held successful concerts for both Christmas and the New Year and I believe they will be continued throughout the winter. They will relieve the general monotony of camp life." Cpl Montgomery was repatriated to England on 1 December 1918 and arrived back in Australia on 4 March 1919. One of a series of over 400 photographs sent by Australian POWs in German camps to Miss M. E. Chomley, Secretary, Prisoners Department, Australian-British Red Cross Society, London. Original album housed in AWM Research Centre at RC00864, Album image number 253.