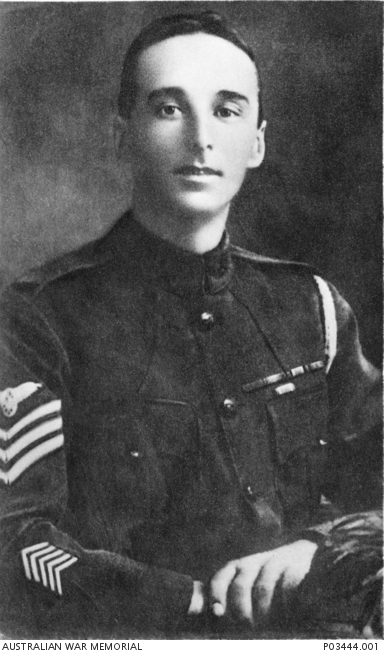 Studio portrait of 1580 Sergeant (Sgt) Frederick Hamilton (Fred) March, Divisional Signal Squadron, Anzac Mounted Divisional Headquarters. He enlisted on 6 September 1915 at Goulburn NSW and was discharged in Egypt at his own request on 6 August 1919. He was promoted to Sergeant for motor cycle duties on 1 April 1917. He won a number of medals for motorcycling with the Cairo Motor Cycle and Light Car Club between 1926 and 1927. He joined the Civil Service in the Sudan and was awarded the Empire Gallantry Medal in trying to save the local Governor from an assassination attempt. This medal was legitimately exchanged in 1940 for a George Cross. He was also awarded a George V MBE (Civil) and a Queen Elizabeth II Silver Jubilee Medal.