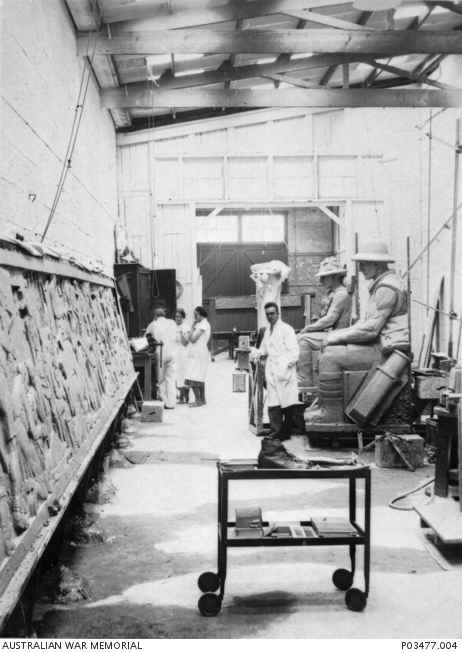 George Rayner Hoff’s assistants inside the artist's Sydney studio at East Sydney Technical College, identified central is possibly Arthur Buist. During this period Hoff's studio worked on various statuary, sculptures and bas-reliefs for the Anzac Memorial in Hyde Park, Sydney. The clay relief lining the left wall is one of two designed by Hoff to adorn the eastern and western portals of the memorial. Each relief depicts various aspects of the AIF's campaigns on the Eastern and Western fronts in precise descriptive realism. To the right are two of the sixteen monumental seated figures made to adorn the exterior buttresses, each depicting typical figures from the Infantry, Navy, Air force and Medical corps. Directly in front of the studio doors is the plaster cast of the maquette for ‘Sacrifice’, the central figure in the Anzac War Memorial.