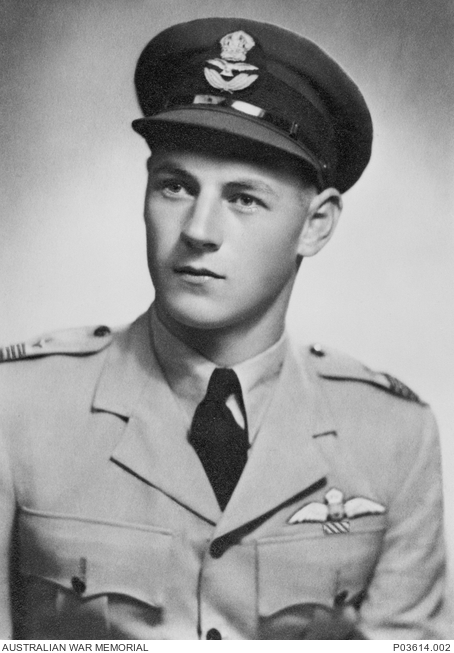 Studio portrait of 385 Flight Lieutenant (later Squadron Leader then Wing Commander) Charles Cuthbertson Learmonth, DFC and Bar, pilot of 14 Squadron, RAAF, of "Carramar", Tyrendarra, Victoria. Appointed a Wing Commander in July 1943 as Commanding Officer (CO) of 22 Squadron, he transferred back to 14 Squadron as CO in December, 1943. On 6 January 1944, he and his crew were killed in Beaufort Bomber A9-346 which crashed into the sea near Rottnest Island off the coast of WA. The other crew members flying with him were 406689 Pilot Officer Frederick Erick Chidlow, 406095 Flying Officer (FO) Douglas Raymond Cullen, and 401523 FO Gordon Gwynne Moore, none of whom have a known grave. Squadron Leader Learmonth received his DFC and Bar for operational sorties in New Guinea in 1942. Learmonth Aerdrome in WA is named after him. His brother VX114 Lieutenant John Noel Learmonth, 2/3 Field Regiment died on 10 May 1944 in Germany (see P02466.096)