A Blohm and Voss Ha 139 seaplane being hoisted onto the stern catapult of the German depot ship, ... 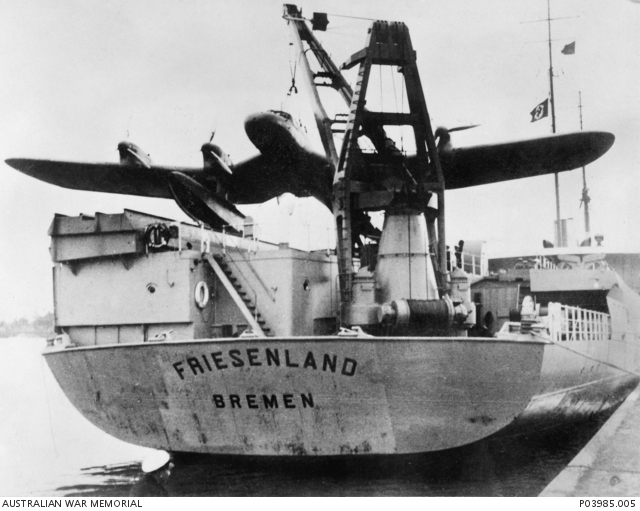 A Blohm and Voss Ha 139 seaplane being hoisted onto the stern catapult of the German depot ship, Friesenland, which is docked in her home port of Bremen, Germany. Initially operated as mail planes by Lufthansa in the 1930s, these aircraft saw limited service with the Luftwaffe during the Second World War as mine laying, reconnaissance and ambulance aircraft. The depot ship Friesenland could carry two of these aircraft and she was launched at Kiel on 23 March 1937 and completed later that year. She operated in France and Norway as a seaplane tender/depot ship, and was also used as a repair ship at Trondheim. After the war, Friesenland was taken over by the Royal Navy and continued to be used as a seaplane depot. In 1949 she was sold into merchant service and renamed Fair sky. She was sold several more times, being renamed Castel Navoso and Argentine Reefer. She was scrapped in 1968-1969.