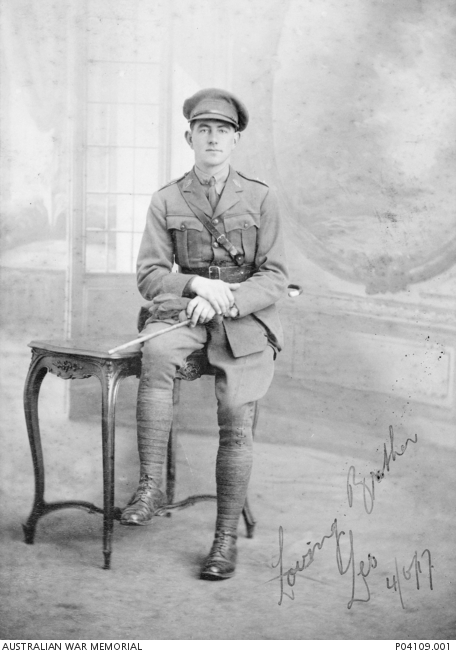 Studio portrait of Lieutenant (Lt) Leo Aloysius McCartin MC, 22nd Battalion (Bn). The inscription reads, "loving brother, Leo". Lt McCartin of Geelong, Vic, enlisted on 13 March 1915 with the number 517 and subsequently served at Gallipoli. He was promoted to the rank of Lieutenant and later awarded the Military Cross on 9 April 1918 for his participation in an action at Lavieville. Lt McCartin was killed by a sniper on 18 August 1918 after action at Herleville. The official history states that whilst in charge of a company of 22 Bn, he was wounded in the head when running back to the support company's headquarters to report the situation. Instructed to retire from fighting Lt McCartin instead headed back to his men and was killed on the way. He was buried close to where he fell and his name is recorded on the memorial at Villers- Bretonneux.